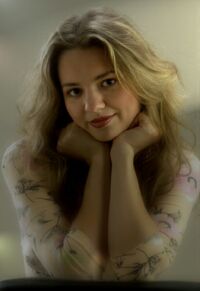 # Details: This girl is really a clever cookie.
She contacted me last year and the communication between us went very well. I didn't suspect anything and I thought she was a real and honest person. She gave me her home phone number and we talked a lot on the phone.
After a week she asked me to come to Russia and meet her so I did. She is very cute and charming. When I came she started to lure me in to her net by seducing me in a really convincing way.
I had a good time and she said that she wanted a future with me. When I got home after a couple of week she began to find excuses for a lot and she didn't answer call often and she didn't hold time schedules agreed on when I called. She said her grandparents didn't have international connection on the phone and so on.
There where a lot of excuses. Before I went for the second time she disappeared for over a week turning of her phone and so on. When I confronted her in Russia she had a lot of excuses all the time and got angry at me. I have used over 10000 usd on this girl paying for trips, medical bills, gifts and gave her money. She had gotten me to fall in love with her and she new how to use my feelings. We promised each other that the future was ours. We had an intimate relation and she told me she was a virgin, but I can promise you she is not.
I hired a detective agency and they found out that she had several men and one of the had left her two days before I arrived, a man from Nova Scotia, but also one from New Zealand and probably more. She is a player and using the men for everything they got.
She makes you come to her and do everything so you fall in Love and then uses you for everything she's got. This is a new breed of scammer and she could be a Hollywood actress because she is so convincing.
If I hadn't found out about this I would have gone back next month and in March. I feel sorry for the other guys because when she can use them no more she will drop them and feel no regrets or compassion she is evil and a cold girl. She can cry convincingly on the phone and tell you how much she misses you and so on.
When I confronted her with the proof I had she admitted to me at least the part I new.
She then dumped me on the spot with no regrets or compassion, but she is continuing scamming others and I hope they read this.


This Girl is really dangerous and how matter how convincingly she seems don't fall for it. She scams you thru your heart. This is the second time I have been scammed, but this was the worst. I hope all you see this and her picture on the Blacklist.