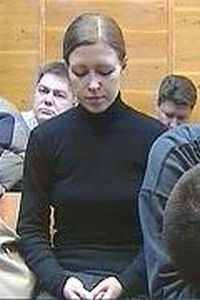 # Details: Russian girl named Alena wishes to marry a foreign man. You still will be able to find such ads in the Internet with the picture of Alena Fedorovskaya. On the dock Fedorovskaya is with her real fiance – Vladimir Osipov.
Together they created a virtual marriage agency Russian Girls. The main bride there was Alena – foreign men were falling in love with her long hair. after short correspondence the bride was asking to send her money for visa and airplane ticket.
But Fedorovskaya did not applied for visa to the USA, didn't go to Moscow, and she and Osipov spent the money for personal needs. The victim lost 1800 usd. The court has found out that scammers have scammed 15 people. The total sum of damage was evaluated as 400 thousand rubles. while the Russian Girls web-site was on-line, Osipov has bought three cars, two apartments and a parcel of land, when Fedorovskaya spent money taken from cheated men on studies at a prestigious institute.
The hooked foreign men even tried to meet the Russian bride in person, for this they came to Ekaterinburg and were searching for Alena at the addresses she gave them. After long searches one of the victims turned to police. In a while creators of the site Russian Girls were caught.
Investigation of this crime was carried out by the specially created department K, with specialists in the field of high technologies. They had to ask Interpol for help. It was difficult to work on this case as it was the first case like this in the experience of police department; another difficulty was that the Russian police had to work with foreign citizens.
The accused claimed not guilty even the day of pronouncement of sentence. Fedorovskaya continued to say that she wanted to marry a foreigner.
Osipov and Fedorovskaya were arrested right in the courtroom. The next five years they will spend in prison.