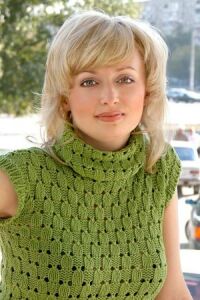 # Seen at:   The scammer contacted me at yahoo personals and gave me an email address to contact her. Her profile said it was still under review and not accessable. I knew it was a scam at that point, but was curious to see how she was going to work it. Her photo came with her next message

# Details: After about two or three emails she stated she was maddly in love with me. She tryed to get my full name and address. I conveniently forgot to give it. and was ask a second time, and I again did not give it to her.She then after 3 or 4 more letters, decided she wanted to come here and be with me. Her problem was she needed $389.00 to pay for a visa to enter the USA. Her travel agent in Moscow had given her that information. I made the excuse that I had friends in immagration and they might get her the visa. I ask for a copy of her passport picture and bio info, also the name and address of the travel agent in Moscow. I also stated that I had money problems and could not send it right away. I am waiting now for her next move.

Details: same old stuff but a different picture and address as i found here, some professonal pics some home digital!!
she fell in love in one week, she has not asked for money yet, but has a freind getting visa now .i see it coming..

First name: Elena
Last name: Kalinina
Country: Russia
City: Bogorodsk
Email: Elenacka@rambler.ru
Details: I did a little investigating and found her posted here. The only thing that I can contribute right now is another email address she's using and two other pics.