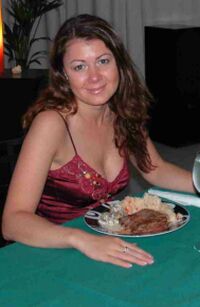 Daer’s,
Our relation started in December 2003.
We first go to Frankfurt for one week.
In januari 2004 we go to Tenerife(Spain) for 10 day’s and I buy a lot off things(warm jacket in Belgium and digital camera) for her.
In March she was 6 day’s in Brussel.
In May she was in Antwerp with her burtsday and she ask 500? for washmachine and cash money.
In july we go 14 day’s to Turkey.
I didn’t see her until October;she say to me that the time was there to make appointment with her most closed friend Sveta in Helsinki.i was there 5 day’s.
There she ask me not to see eachother until she finished the university.
You can look at the sms-she sent by mobile(I seaved by Nokia PC suite).
I pay 4 times her study(4x800?).
She ask money for-refrigirator(800?),laptop(600?),secrettaire(250?),boiler(300?),ticket for switserland and clothes she buy in Finland;money she ask her girlfriend Sveta;(1200?).
When she came to Belgium (Brugge)in July I present her a watch but she didn’t like it and I buy a new one Rado for 1200?,clothes and also gave her the 1200? she must give back to Sveta.
I buy her chourdan shoes(2x) in August(sales) and she deicided to visit me with Sveta in my city(01/10 until 06/10/2005).
After 3 day’s Sveta leaves earlier and she stay 2 day’s longer and ask some more clothes.
I also gave her a nice ring(500?)for our relationship.
She leaves the 06/10/2005 and promise me to think about visum,but she also want to go first on vacation.
The 09/10/2005 I receive a sms that she will go to study in the USA for 6 month.
She leaves Spb the 10/10/2005 to the USA.
I phone Sveta and after a long talk she say;jos forget Kate;she is realy a bad person;she is sick in mind and she only want those shoes and money from you.
Sveta told me that it was impossible to stay longer because she couldn’t accept that Kate deceive me.
I phone her mother and she say that Kate is in the country.
PS.In July I gave her all the official papers for student visum for Belgium but she never was go to the Belgium consulat in Moskou(information from vise-consul:Caroline Mouchart).
I know now that I was very stupid to believe her all the time.
I only want that she didn’t make more victims,because I know that she will never stopped.
She is a nice and honest laywer with a …background.