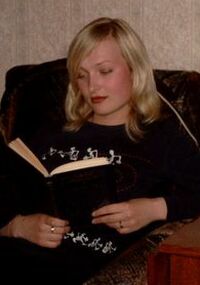 First name: Anna
Last name: Rozhentsova
Country: Russia
City: Cheboksary
Email: anyachebok@yahoo.com
Address: flat 44 sovetsaia street 4 cheboksary 428018
Details: started to write, have been for many months then wanted to come to UK to be my wife, which we had talked about a great deal. needed visa and travel costs so I sent an inital payment of $500 US.

details: Started to write from getting her on site click4company, after about a week or so strated to write about how she wanted to be with me, (now know better), any how said she had no partents they were dead and her grandmother had rasied her, after a few more intermate letters got one saying her grandmother was having to go into hospital and the money she had saved had been used for gren's medication & treatment, but she still wanted to be with me, but now had no money for the pland trip we had put into plan. So foolishly I said I would help and she asked for 2000$ US to cover her visa application, medical & agency fee for air fare/plane ticket.

So before I sent any money I made a few enquiries of my own found out all this she had told me was Bull crap. I stringed her on for a few more days, her letters then accused me of not wanting her or I'd send the money for to be together. Again I managed to put her off for a few more days, and the by chance found your site, boy was I shocked, anyway I wrote to her and said I had changed my mind about her and us, well if I could have printed what she wrote I think we would all be locked up and thank heaven I have not heard a thing from her since. Like I said I wrote and told CLICK4COMPANY.COM and I have monitered their site the past two weeks and SHE IS STILL GOING AT STRONGLY!!! WARN OTHER GUYS PLEASE!!! SHE IS ONE DEVIOUS BITCH!!! AND AS FOR CLICK4COMPANY.COM well I think their in on her scam as they will NOT remove her, why ? ? ? Anyhow please warn as many as you can she is a serious scammer this one, please print her AKA as Alventina A002093 on click4company in bold letters so no one miss's it Thanks Guys...

# First reported: Marc de G.
# Date: 2005-10-21
After a short period of time, she gets more intimate with you, then she hits you with the "story" of meeting you,She requests the funds to be sent via Western Union to her bank, that being, Vneshtorgbank at the above address under the name of Anna Rozhentsova.