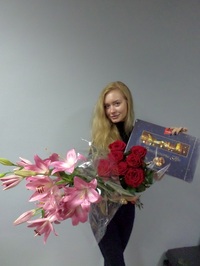 # Scam scenarios:   My brother spent 6 years in a Dating Site on internet writing to Polina Kovealevskaya, a woman who was in secret on a relationship with a DJ named Ilya Shved, while she received at the same time gifts from other suitors and stole years of lif

# Details: My brother spent 6 years in a Dating Site on internet writing to Polina Kovealevskaya, a woman who was in secret on a relationship with a DJ named Ilya Shved, while she received at the same time gifts from other suitors and stole years of lifes illusions from her "lovers". rnrn?Ђ‹rnrnHe never managed to meet with him during that time, and he was faithful to her.rnrn rnrnBut in the meanwhile he had to go to psychologists because sometimes he told me that he couldnt do anything to get anything from her, except letters and photos during all that time.rnrn rnrnHe wanted a family with her, and she called him "her man", she was trying him to get more expensive gifts this year because she knew that her reign of lies was coming to an end, like an iPhone or a McBook, because she said that otherwise she would not be able to contact him. rnrn?Ђ‹rnrnFrom the beginning I distrusted her as he treated him, and I always put him in doubt of what she said, and that a girl like that could be six years being faithful and without being with others.rnrn?Ђ‹rnrnSo my brother always complained bitterly about not being able to live with her and have a family, when she were partying in Los Angeles, Cyprus or Croatia, and asked him for FIDELITY.rnrn rnrnHow can Polina be so cold, despicable and abusive? To spoil love ald hope of a man who was abandonned by two women before, our father with cancer, and going to the doctor because he was full of anxiety and called me by night crying for her? (as she says she did for him too)rnrn rnrnHer dignity is like a shit, and freeze as her heart, but she is used to breaking hearts, and she dont care how.rnrnShe, who demanded my brother to be faithful to her... while she was fucking and partying with her beloved.rn.rnDid she ever really want something more than boats (her parents boat, she said to my brother), cars, luxury wardrobe,or her plane? (she was in a photo shoot, she said to my brother when he got suspicious about it, and she didnt have boyfriend, repeated to him! hahahaha)rnrnrnDid she ever really love anyone in her life? I really mean, not for the money, and her branded clothes, and her expensive restaurants ,and other classy kievite barbie girl stories, as fake as her brain and heart, I mean.rnrn rnrnMy father with cancer, he on sick leave from his job, two love disasters with other partners and you finished blowing up his life, you robbed him of what little dignity he had left by giving him the final blow...DURING SIX YEARS!!!rn rnrnOr was it just a distraction, while she was getting her life back on track with her husband, and she left him because she got herpregnant?rnrn?Ђ‹rnrnA form of psychologist, of her dull and loveless life that she was saving with him, or just a business in which she was making money with many other fools like him, collecting letters and gifts,and money by eacha letter sent to them?rnrn rnrnThat is is it Polina Kovelvskaya!!