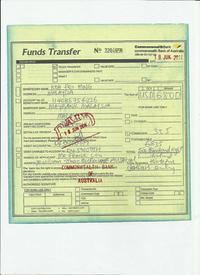 # Scam scenarios:   I get to know this lady nickname Rose through Skout . She said she is from Poland, and we exchanged phone numbers and contact through Whatsapp. She told me she is working for Trophic Oil Company (company based in US), had a degree in some uni

# Details: I get to know this lady nickname Rose through Skout . She said she is from Poland, and we exchanged phone numbers and contact through Whatsapp. She told me she is working for Trophic Oil Company (company based in US), had a degree in some university in Texas, now working in Malaysia. Everyday morning and night she will either texted me or call me , said that she misses me and want to meet me someday. One day, she texted me said that she needs to go back to States for urgent company meeting. We continue to texted each other and she called me daily to wish me good night. Few days ago, she said that she will come down to Malaysia and meet me for a few days before go to Dubai. She even sent me a copy of flight ticket from flying from States to London and straight to Kuala Lumpur, Malaysia. On 19/06/14 morning, received a text that she had landed safely in Kuala Lumpur, taking her luggage shortly. After a while, she texted that she was being held in Customs department, as she had brought USD850 kept in luggage, reason being that she did not declare and Customs officer was asking on the certificate for her to justify that the money belongs to her. I began to suspect something, as usually only above USD 10,000 that you are required to declare. Okay I continued to play on. Then she called me later in noon said that she was being held, and she had called her friend from Australia to bank in money for her to use in Malaysia, and needed a local bank account. I gave her mine bank account (Maybank), my full name and email address. Later received an email from her friend called Frank Leo , he had given a copy of bank in slip with my name on it, bank in amount USD 6800 through Commonwealth Bank of Australia, email also stated request me to help his friend Rose to pay the money, and the money will only be credited to my account after 3 days.I texted Rose that i received the email, and how do i pay to her. She replied that she will get the bank account number from a custom officer named Rameli Bin Mustaffa, Maybank account no 107116179384. Suspecting that this was a scam, i texted her said that let me speak to the custom officer, and asked for their office number. She went silence, then texted me that she was tired, money was not an issue, just do what she wants and i wont regret it. I still ask to speak to an officer before anything else, and silence. She did not texted me or called me back ever since.