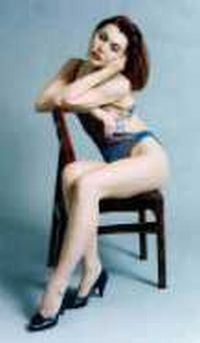 # Details: We have received many complaints about this woman, and her activity is often discussed on Travel Chernovtsy message board.

According to what we have heard from our clients, Elena has been corresponding with many men for few years already. Usually all of them would get an invitation to visit her in Ukraine, for personal meeting and possibly marriage / engagement.

Since Elena was a client of "Luba's Club" marriage agency for a long time, the usual scenario was a follows:

the man would contact "Luba's Club" inquiring about possible visit and would receive a standard letter where he would find out that to engage or marry the girl he would need to pay $1000 to the owner of the agency, Mrs. Baranova
*

the man would arrive to Ukraine and meet Elena, spend some time with her and make a decision if he would like to become engaged to Elena or not
*

if the engagement would take place, he would also be recommended to buy an engagement ring.
o

Two of our clients said they paid another $1000 to Mrs. Baranova for the engagement ring chosen either by Mrs. Baranova or Elena.
o

The total cost of the engagement would be around three to four thousand dollars.
*

To our knowledge Ms. Voloschuk has been engaged at least 3 times in 2001.

The facts above lead us to the assumption that Ms. Voloschuk and Mrs. Baranova work or worked as partners to profit from the fianc?©'s visit and engagement expenses.


"I did not read all the signs before I visited her. I had originally received an unsolicited email from Mrs B containing pictures of women from her agency. Several months later I received a letter that I thought was from Elena, but it was also from The Baron, and some pictures. When I went to Ukraine and had unsuccessful socials with AFA I decided to travel up to Chernovsty to meet Elena. I spent most of the next day on the road with Igor Winkler,the driver, and did not get into Chernovsty much before midnight. The electricity was out in the whole town and I was escorted by four strangers in the dark with candles to the fourth floor apartment to meet Elena. Can you only imagine what was going thru my mind? When I entered the apartment I saw a dinner that was prepared for me and I was told to wait for Elena. When Elena entered the room I immediately saw how beautiful she was and I thought this was too good to be true. Elena spoke very good English and immediately told me how she was attracted to me. the entire weekend we spent together and went to various restaurants and walked around the city. Because of the World Trade thing I told her I would stay four additional days to spend more time with her. Elena told me her parents were out of town for several weeks at their country cottage. He mother was a school teacher and her father was a retired military officer. Elena showed me the outside of her families apartment when we drove by in a cab, but on several occasions when she was leaving my apartment late, she said it would be dangerous for me to walk her home. I noticed the $120 shoes she wore and the expensive skirts she wore, but I had been told the women in the FSU bought expensive clothing because they got more wear out of them. I thought it was unusual for a school teacher to be able to afford these things.
Mrs.B told me that we decided to get engaged she would require $1000 and that I would have to buy her a ring. Elena told me that it was not necessary to buy her a ring. I decided that in order to show her my feelings I would buy her a ring. The ring cost me $1000. Later that week when I showed her some pictures I had taken of her at the engagement meeting and asked her If she wanted any of them, she took them from me and tore them up, saying only that they were not good pictures of her and that she would send me better ones. That night I was up all night and started to suspect something. I thought it was unusual behavior. I later realized she did not want me to have any proof of giving her this ring? The next day I took a 23 hour train ride back to Odessa for my flight home. It was approximately 12 days before I received letters from her,which seemed to be written by someone else. It was another week before I made voice contact with her. After I wrote another email to her English friend Nick Marsh and he told me many unkind things about her. I was mad and emailed this to Elena. The next day she called me at 5:00 AM and acted very hurt and told me not to talk to Nick. The rest of the story is in the two letters I emailed to you. I do not care about the ring. I will never she it again or Elena. I was hurt more by the fact that I thought we were being honest to each other. Elena has done this to several other men and can not be trusted. She had no intention of leaving Ukraine, and I doubt she is even a school teacher. Thomas

I am Elena Voloschuk, born on May 29, 1973. I am 5'8, 115lb 36-23-36. I never got married. I have no children. I have blonde hair and green eyes. I graduated university my profession is a teacher of secondary school. I like children very much. Now I live with my parents. My father is a military officer and mother is a teacher at secondary school. I have an elder brother; he is married with two children. When I have some spare time I gladly spend it with them. I like good movies and always try to watch them on TV or cinemas. I can say that I am romantic person and sometime I can even cry after the tragic scene. But I also can easy come back to normal mood. Friends say I'm very calm and sensitive person.

Anybody can ask me for help and I can't say пїЅnoпїЅ. I believe, people have to help each other. Then good actions will be surely back when we would really need it.

Well, a few more about my life-interest. Only one is permanent since my early childhood till now. It's reading. I read always and everything which I could get. I became more legible later and had my literature tastes more firmly formed. But I consider classical works of the Golden Era of the Russian literature to be really treasure of the world culture.

Triple in a week I have my aerobics. It's very important for me because I want to stay healthy and I want to keep my body in the good shape. I think I am a person who will never become fat when I'll be older.

My life rather active but, to my sadness, can't disperse away my loneliness... That's why I decided to enter the Club. I know that there were about 100 marriages with Americans in the Club and all of them are successful. All our American visitors were very intelligent and friendly and they became loving, tender and faithful husbands.

You can also call Mrs. Baranova and make an arrangement for our later phone talking. 380-3722-235-49. I will also know more about you and you just ask me what you want to know about me and I will answer.