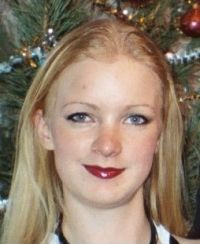 # Details: In October of 2002 I took the AFA tour of Dnepropetrovsk. She was very beautiful, but I thought she was too immature to have a serious relationship. So I talked with her, or her "mother", and then politely moved on to another table.

Last year I was ready to take another trip, so I went through AFA???s website, where I saw Aleksandra???s photo. I thought maybe she is old enough for a serious relationship. So, I ordered her address from AFA and sent her flower???s in March 2004. We began exchanging emails and I returned to Dnepropetrovsk in October of 2004 for a brief stay. Things went well with Aleksandra. She invited me to return and spend the holidays with her. I managed to find reasonable airfare and I agreed to return for New Years Eve 2004 and Orthodox Christmas, January 7, 2005.

Every time I needed her help with something, she helped herself to some of my money. To wit:

1. Taking $300 of my money, sent Western Union to reserve a room for me. Aleksandra wrote the hotel didn???t accept a credit card. It did and when I arrived no amount of the first night???s rent was paid.
2. Hiring her "former" boyfriend???s brother to drive us around Dneprodzerzhinsk in her "former" boyfriend???s car. He drove me across the river and back across another bridge just driving from my hotel to everywhere else in Dneprodzerzhinsk, which I now know, is all on the same side of the river.
3. Arranging for her "former" boyfriend and his brother to drive me to the airport in Kiev. The price kept going up, the amount of people in the car kept going up, and I was assaulted at the airport.