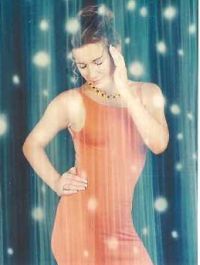 # Details: Name: Anna Iatsenko, Anna Yatsenko, Anya Iatsenko Email: aquamarine_eyes@mail.ru Passport: XX 5421733 Home Phone: 007 4232 45 034X, earlier 007 4232 25 034X Work Address: Fesco Intermodal 690600, Russia, Vladivostok, 1 Nizhne - Portovaya str., 2-nd floor, Tel 49-69-72. City: Vladivostok Profiles: diOritz.com id:1687 Elenasmodels.com id:04130 Eurobrides.com id:anadaoqu First of all, this is a real women living in Vladivostok, and since Ive met with her, I know that the pictures are of her. I would never have thought this was a scam before I started writing to her under a different name!!! I started out by meeting her in Moscow which actually convinced me that this was not a scam, however there were some discrepancies here as well. First of all, she was in Moscow a lot longer than she initially told me. I was writing to her the days before my arrival and the days after my departure from Moscow. The pre-arrival emails where replied at normal evening time in central europe, however in Vladivostok it would be 4-5am at the time she was writing! My flight to Moscow had to be changed a few times because Anna all of a sudden couldnt come at the initial dates. Well, I convinced myself that she was meeting friends and not other men. We met, and it was great! She spends a lot of time shopping in Moscow. She said it was for friends, and it was not her money. Even very expensive items like mobile phones and perfumes were bought. I didnt care; I just wanted to spend time with her. We met some of her friends, and on the third day she had to go buy a jacket. This time she wanted to go alone. I thought that it was a bit strange, but I could use a time off myself so I said OK. It took her 4 hours and she came home without jacket! However, besides her busy schedule where I was just a bystander, she was very attentive and very nice. When I got home from Moscow we agreed that she should come visit me, and we applied for visa:

First of all, a 90-day (max.) visa will always take approximately two months to process in my country, and I also thought the price was a bit steep, but she said that visa had to go with currier both ways in order not to loose passport. I believed, however passport didn't arrive before more than a week later at the embassy (I called embassy every day to hear if passport had arrived), which means that it could have been send by normal mail, and 120$ of the 150$ were not used! Currier was supposed to take one day!

However notice how she never asked me for any money in the mail. She said she would be able to pay in two weeks. Off course I'm not going to wait two weeks for her to apply for visa! Good one.

While the immigration services processed her visa something else happened, namely she lost her job where she made 300$ per month and later her grandmother got ill. Also her car broke down, and she had to go to the dentist for surgically remove wisdom tooth. She told me this in very discrete ways on the phone and she never asked me for money: "I can't go to English classes because I have no more money, but I can learn English when I come to you. English is very expensive, it's 400$ for two months". If she earns 300$ per month, I would think that 400$ out of 600$ income in two
months would be ridiculously expensive and I don't see how she could go to English classes in the first place!

She said she had to go take care of her grandmother and couldn't talk as much with me. Maybe this was because she figured out that I didn't want to send a perfect stranger money. Only time she asked question related to money, was "when I would send money for ticket". I explained to her that I wouldn't send money but instead buy a non-refundable ticket from my place and she could pick it up at her town. She replied "That is not possible, send money instead, it's better this way".

I didn't think much of her unfortunate incidents, since it all seemed fair, but the ticket I knew that I could buy here, and she could pick it up at her place!!!!

From this moment, I hardly ever got an email from her. She was always taking care of her grandmother. But when I got a note from time to time, it was always very short and just said that she missed me and she sends me many kisses. Typically 10-14 days between letters and none of the questions from my emails were answered; however this was very common in all her letters throughout the period we communicated. She was very good at answering my questions on the telephone, though. Maybe that's why I preferred to talk with her on the phone, instead of emailing. Have approximately spend 1000$ on telephone bills during three month period.

A friend of mine told me to start writing to her under a different name and I did. I told her that I was teacher from Spain and was going to Seoul in South Korea to teach at university (close to Vladivostok). She immediately responded to "this man", however my own letters where not replied at all. Even though I said I missed her very much, and would love to hear from her.
I tried with yet another profile as well, and again this one got an answer right away, but no mails for me!

I confronted her and got this reply (I changed name to xxxxx):

My Dearest xxxxx!
I am very sorry that I dont writre to you for along time- I was this my grand mother to help her! xxxxxx, I really want to meet with you as soos as possible but I must help my grand mother cause only I can help her now!!!
My darling, I called to the agency today and they say me that I must get my visa in 5 days!!!
So, I can go to you 15-th of January and if you really want to meet me you understand!!!
xxxxx, I came home today and I'll waiting for your call!
If you buy tickets, please call me cause I must told it in my agency.
xxxxx, if my english will be better I be able to explain you everything that I feel, but I cant!
I only can write to you that I like you very very much and want to see you terribly!
Kissing you,
your Anna

First of all, visa is valid until April 2003 so there is no rush. Second of all, how come 15th January is suddenly a good date? Her last mail was a desperate attempt to make me buy the damn ticket. By the way, a non-refundable ticket IS refundable when it's a month in advance, however, with a big fee from the airline off course! Also, she wasn't home all night, her "brother" or whatever her roommate is, told me, that she she was out with friends. I called her next morning (at her place) and her "brother"
told me that she didn't even come home that night, and still wasn't home.
What an odd way of "waiting for my call"!

She never intended to visit me, and she probably knew that I was on to her already. Maybe I should have waited and bought the ticket and then I would concrete evidence and I could report her to the police.

Other notes:
1) She forgot adaptor for mobile phone in Moscow. She said it would be best if I sent it to her work address, and I asked why; she said "My English not so good, work address is better"

2) When I asked for her mobile phone number in Vladivostok she said "To expensive when people outside Vladivostok call me", and when I asked to just supply it in case of emergency she said that she would send number in mail. Needless to say, she never did.

3) She left me with a 50$ phonebill at the hotel! She asked if she could use the phone for local calls, but most of the time she was talking to Vladivostok.

5) She still works at Fasco Intermodal!