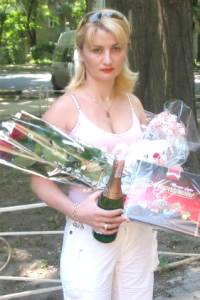 # Details: I corresponded with Diana for a very long time,through Alyonushka dating services from Odessa,she never asked for money,its all about the money you pay for correspondence and the gifts you send through the agency,flowers,english lessons etc.and the meeting in the end where you find out she never has time to meeet just for a couple of hours after work,for the time I was there we met twice,during our correspondence she dissapeared for eight weks with no explanation,then she came back with a letter,before she vanished I told her in a letter I would be arriving in August,when she came back after eight weeks she didnt even know we had a meeting planned,I did find out for the eight weeks she didnt write she was living with another man from the states that she met in Odessa,the reason I do know that I speak Russian,which she didnt know,that was her conversation with her girlfriend while we were haveing dinner,she has been with the agency now for three years,in my opinion she has no intention of a serious realtionship,she was paid by the agency to meet,so any one intending to meet Diana in the future I wiould be very carefull,go back through your letters carefully and you will find plenty of mistakes they make which I should have picked up in my letters from her,if you receive pictures with every letter something is wrong they were all taken who knows when,I received at least three hundred pictures