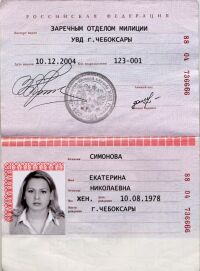 # Details: I have known, in July, a Russian girl on a site that I thought offered the most greater guarrantee of safety…Match.com.
I have to admit that she was almost perfect...
She was wonderfull, nice, witty, happy, romantic, sensitive, sweet..
In short.. what every man looks for in a woman!!
She has only a little but not negligible defect..
She doesn’t exists!!
It seemed everything too much beautiful to be true and she has made some small mistakes that instead has made suspicious.. actually to the point to make to verify her real existence.
And that was the result!!!
Take care…she is very intelligent, she answers to the questions and she is not in a hurry…..
If you want to avoid disappointments useless and…most of all loss of money I recommend you…don’t continue the correspondence with her..
She asked money for visa and internet

Details: i am in corresspondance with a scammer ive now
discovered by looking on your site..by the name of
..EKATERINA SIMONOVA....she first contacted me via red
personals.gave me her email address as
zvetok@mail.ru...letters started from november
2005..then after christmas she hinted of a meeting,i
suggested that i would fly over to russia to see her
but could not arrive till the middle of summer.then
she suggested coming over here herself...at that stage
i offerd to pay the flight ..then came that she needed
money for a visa around 200 us dollarsso plus her
flight it would have come to around 650 us
dollars...she suggested using western union as she
said she had no bank account...i got very close to
transfering that sum but western union warned me of
scams going on so i declined the transfer..i then did
a search using her name and came to your web site and
i am glad i did because she appears on your site as a
scammer...i have photos of here that are recent of
which i will send to you..one of the photos
dscfo407..she is wearing a locket that i sent to her
address back in december 2005...on my computer the
photo details have a date of 28/02/2005 this is not
correct as the locket was sent to her in december
2005....i have so far a total of 37 emails from here
and am still in contact because i said i could get
enough funds this week but in 2 weeks time so she is
hanging on ......also i sent an email to her other
email under a different name
on the 25/02/06..and got a reply with a few hours...a
big letter describing herself dreams ect and very
happy to correspond with me also a photo the same one
as she sent to my other id back in november.....it
would be good if something could be done to stop her
and others....i got her dangerling but what should i
do now .....

Details: This girl is very clever ,she takes her time
and gives every indication that she is for real.
It was only her greed in the end that lead me to be suspicious of her and to look up this site and I found
her straight away.She wanted 750us dollars for a visa
and passport and when she had that she wanted me to pay her air fare to Australia,she was always telling me how poor she was and that she couldn't wait to leave the country.
She wanted the money to be sent by western union under the name ekaterina simonova,Russia and could tell me all how it worked.We corresponded for
neally 2 months 22/1/06 to 11/3/06 she even called me
once to ask for the money and told me she needed it urgently.But she wouldn't give me her phone number or address .Of course she never got a cent out of me but
it was awfully close though,thanks to this site it saved me a lot of money.