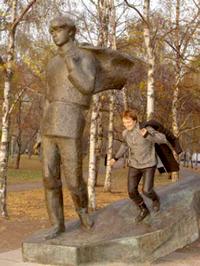 # Scam scenarios:   I knew him on the site www.neu.de where he stayed just afewdays and disappeared. I recievd from him emails, in which he promises eternal love, and so on... He gave me his name and adress: Dmitriy Serebryacov Gagarina 53 Kazan Russia In orde

# Details: I knew him on the site www.neu.de where he stayed just afewdays and disappeared. I recievd from him emails, in which he promises eternal love, and so on...rnrnHe gave me his name and adress: rnDmitriy SerebryacovrnGagarina 53rnKazanrnRussiarnIn order to be sure this adress is correct, I sent him for about 1 month a letter he never recieved (accordingto him).rnrnHis mail address is: dimuska1980@googlemail.comrnrnAs I became carefull with him, I asked him to send me pictures of him with my letter in the hands: what he never did.rnI started to search for him on other gay sites, and found him by webcrawler, under the same nickname, with the same pictures.. I contacted some of his contacts, and they confirmed they recieved from him all the same letters as I recieved! Just the name was changed!rnrnIn his past mails, he started to beg for money (about 1000 euros) in order to pay his pass, insurance, visa and fly ticket to come over to me for a few weeks. I answered that I would not do this because I do not trust the russian post system. In his last mail, he adviced me to send the money per Western Union.... What I will never do, of course!rnrnAs I want to know his last arguments, I told him to fly to Kazan to him, and then, I will decide personally with him on what Ill do.. I’m curious to know what he will answer!rnrnHe is obviously a scammer and earns quick money with people who maybe are not so careful as I am.rnrnPlease take notice of my report, and warn the users about his actions.rnrnMay I know whether I could report it by the police? But where? By whom?