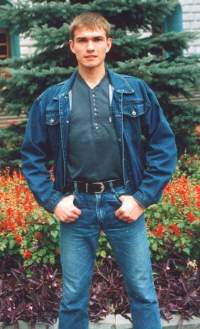 # Details: "Alex" claims to be agy and also the he is an airport control tower operator. He claims that he desperately wants to move to the west and find an older man. He contacted me though the website gay.com.

Unlike a lot of scammers, his English is near-perfect. His story is that he will soon have to sign a labor contract with the Ukrainian government, and once that happens he will be forbidden to write, email, or telephone any foreigners.

He claims to have made arrangements to take a guided tour to the USA, thereby bypassing the normal visa process. He only needs about $2,000 to cover the trip. When no money was forthcoming from me, his requests got smaller and smaller as members of his family just "found" more money. He's a very convincing liar, and even had all the figues broken down between his own savings, what his parents and sister will contribute, and how much he needed me to supply.