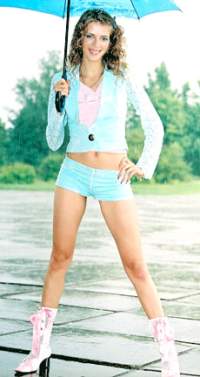 # Details: This scammer is not an impersonator and is currently a medical student in Lugansk. She first contacted me through the BeHappy 2day agency in December 2005 and after two months of letters and two phone calls, we agreed to meet. At first, we considered meeting in Lugansk, but she later suggested meeting in Kiev, which we did. I made arrangements for an eight-day trip, including renting an apratment, hiring a translator, Dasha's (and the translator's) roundtrip airfare to Kiev (among other things). I knew that I would be responsible for normal expenses such as food and transportation and I also arrived with some inexpensive gifts. The excpetion were a pair of moderately-priced earrings, which I purchased for the Women's Day holiday (March 8), which was the date of my arrival.

Things seemed to be in order after I arrived and we settled in. Less than 24 hours after my arrival we had our first excursion about Kiev, and after spending a few moments in a mall, she asked me to buy an expensive bottle of perfume. I was very suprised by such a request, but the translator told me that there was nothing for me to be concerned about and reluctantly, I purchased the fragrance.

During the course of our stay, Dasha asked me to purchase several other moderately priced items, including a watch and some shoes, in addition to some less expensive gifts. My suspicion increased as it started to become clear to me that she had no real romantic interest in me, but was more interested in having a good time and going shopping at my expense. When I shared my concerns, she claimed that she had romantic feelings for me, even though she never responded to any of my romantic overtures. The translator (who was also from Lugansk) assured me throughout that I was not being used.

After returning to the USA, we kept corresponding and she kept emphasizing how she considered me to be her boyfriend, even though we had never shared a single kiss (despite my overtures). I had my doubts and decided to test her by sending an inexpensive bouquet of flowers for her birthday, which fell a month after our Kiev meeting. She had sent several hints that her birthday was coming up and so called "private" e-mails from the translator included hints about Dasha's desire for a digital camera.

The flowers were delivered on her birthday as planned and despite the fact I also sent a birthday meesage, I never received a reply or any kind acknowledgment from Dasha. This confirmed my doubts, as up until the day before her birthday, her letters expressed her deep affection and admiration for her boyrfriend (i.e., me).

# Date: 2006-05-18
I registered my concerns with most of the agencies that listed Dasha's profile and as of this date, only two have removed her from their database. The day before her birthday, her (last) letter expressed her deep affection for her boyrfriend (i.e., me):

Hello my dearest Michael!
Do you know how much I missed you here? Thank you very much for
being worried about me, it gives me more energy and forces and your
letters are the best medicine I could ever have. So I guess in case
if I get ill someday the only thing you should do- just to speak
with me with your kind and warm words and I will recover
immediately!!! Deal?!!!!

Nice to read that you visited the hoсkey game, I have never seen it
in reality but I know you like it a lot. Accept my congratulations
on behalf of the winning team. Speaking about that jersey and the
popularity of that hoсkey player form Ukraine, to tell you the truth
I have never heard about him as I am not interested in sport events
so much, especially in hockey. So I can't comment anyhow on that
player. Maybe one day I will embroider the one for you and you will
have a handmade jersey from your girlfriend? Do you like my idea?

Don't worry , Michael about that fact you won't be able to write to
me on a regular basis, I know how important for you those church
services and I wish I could join you.

Yes I could have some rest on Sunday only, I tried to sleep a lot,
helped my mother to tidy up the flat and of cause visited the
skating rink, it gave me a lot of pleasure the only thing I
regretted that you were not there with me.

I will be waiting for your reply with impatience.
I send for you my tender kiss.
Your Dasha.

This woman is only interested in what she can get from a man and should be completely avoided.