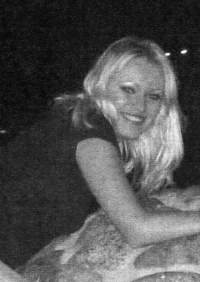 I am a scam victem and here are the pictures she sent me . As I said before , she is real good at making you fall in love and send her money . She created one story of how the flight tickets were more thant she had . Her parents had supposedly died 10yr.s ago and she even pawned moms jewelry but still needed more . Then when she got to Moscow , she claimed they wouldn't let her board with no money ( cause what if something were to happen where I didn't show - she would be in a strange country and might resort to prostitution . She is good at making you beleive she is in love and it is "for real" , so I borrowed and sent bill money ( Western Union - which she happened to suggest if I really wanted to meet her ) , so I sent her appr. $1200.00 all together , just to find out I've been scammed - she didn't show at the airport . The local police ( who have all my e-mails and pics from her which I had collected ) , said that she was supposed to be on 3 different flights that night ( Wed. Apr.19 ) . All flights / flight numbers were real - she just wasn't on them . Also he said you could tell it was a fake Visa / Passport ( which I included in this message ) because her picture is not completely in the border - she had transposed her picture on a fake visa ( there is also a number - bottom right I think he said ) which wasn't there either . Unfortunately , from what I've been told , nothing can be done - but atleast maybe this will assisst any other potential victem . She is "Anna Talstova" - Sarapul city , Russia - 30yr.s old , said "poorly worthy men over there , they many drink vodka and are rough . Watch out - she is real good . Incidently , I think she got my profile / info from yahoo personals - but no matter which dating site you use , how can you really prevent this from happening ?

# Date: 2006-04-23
Money was requested to be sent to Anna Talstova-KRASNOGEROISKAYA STR, 89, CITY-IZHEVSK 426034,450.00 THRU WESTERN UNION FOR AIRFAIR, 700.00 SENT FOR MONEY TO GET OUT OF MOSCOW, E-MAILS WERE SENT BACK AND FORTH OF HOW MUCH SHE LOVED, WANTED TO SEE ME, SHE WAS GOING TO PAY FOR THE TICKET AND HAD NO MONEY, SHE WAS COMING TO THE UNITED STATES ON WED. APRIL 19 AND NEVER SHOWED AT THE AIRPORT. MANY PICTURES OF HER WERE SENT AND MATCHED ANNA TALSTOVA ON THE SCAM WEB SITE.