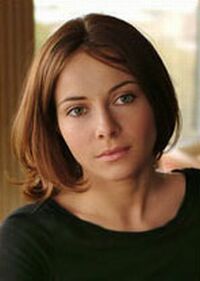 Subject purported to be a 31 year old (DOB 1/21/1975) doctor from Russia selected by the Russian/American Governments to come to the United States for an "exchange program". Subject was supposed to be here December 20, 2005 for a year. Stated "she" tested high in the "testing process so was going to be allowed to select the Hospital she worked at in the United States. There was an e-mail exchange over a period of 4 weeks in which apparent emotional connection occurred very quickly. Subject promised to select a hospital in California as close to me as she could. Subject had made several references about the inability of her "trade union" to fund the travel cost of $950 US dollars. Subject forwarded forged copy of an American Visa to me as proof of intent. While waiting for Visa to be verified, I offered to purchase airline ticket for subject, but that was refused. I asked subject to give me the name of the "Program Director" from the United States Government to verify program prior to transferring any funds. Subject has not replied since.

Story progressed as expected and eventually subject stated travel funds were not available through her "union" and requested a transfer of $950 dollars to Russia for travel to the United States. I received verification of forged US Visa (forgery verified through fpmm@state.gov) prior to any funds being transferred.

Subject has not been heard from since

Details: Like the other David I was first approached via Match.com, only when she approached me she was using the name Natilia Smirnova, and she said she was from Norilsk. She said she was a Dentist. Her Email then was spring_rainbow843@yahoo.com

Details: The scam played out EXACTLY like the 2nd report as told by David. Same names, same situation. The only thing not mentioned is that she is sometimes called Dunia by her good friends. Luckily, I found out it was a scam before she asked for any money. Before finding out it was a scam, I was a bit suspicious. She never really commented on anything I wrote in my emails and never answered any questions. Thought it was also odd that she calls her parents sometimes, but in a later email mentioned she does not have a phone in her apartment. Never heard back from her since I asked for her the name of the exchange program.