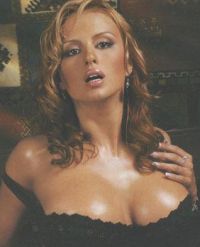 She says her profession is Children???s doctor at the Pirogava Hospital in Samara. However when the hospital was contacted no one there had heard of Alina Chernuk.

She gives an Italian cell phone number as her contact number - +39-33-83-29-1425.
She maintains it is the phone number of her girlfriend in Italy. In her youth she had an exchange program with a family in Sassuolo near Modena in central Italy. So she says. Due to this she was in Italy when she contacted me visiting her friends, who she said was named Sabrina.

Scam:
She asked for money to fly to Dominica to meet for a holiday. The holiday tour would cost U$800 from Milan. She sent information on flights and a hotel in Dominica. She said she has vacation from her work until Mid August. But the hospital in Samara has no record of A. Chernuk.

Keep in mind there is another A. Chernuk from Kyiv that is a known scammer, maybe it is the same person, I don???t know. The pictures are different.

She speaks flawless English but writes poorly. This may indicate 2 people involved.
She also speaks Italian.

She indicated she also had problems of some sort in Italy involving the police. Not sure what that meant.

She has model type photos taken at a resort.

She contacted me from the www.luckylovers.net website, and her profile has since disappeared. When contacted the LL.net website said they remove profiles of scammers, unfortunately when they do that all information about the ID and scammer are lost.