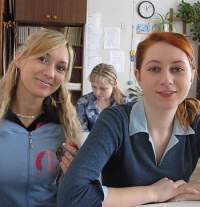 I gave her money for air fair 300.00went to doninvest chekhova121 Taganrog,347900 went to nadezhda lekomtsewa and then she said she was at the airport and had to have 500.00 to leave and i had to send it to Moscow for Elena Presnyakowa

First name: Nadezhda
Last name: Lekomtsewa
Country: Russia
City: Petrovka
Details: My brother was contacted by her in April and has been scaming him since. He met her on true.com she is under the user name daisy wheel.

I don't know to many details but he bought her a plane ticket to come out, then she backed out and claimed something happened and she will try to make it out soon.

the money was sent by western Union 300.00 dollars was senttoDonivest Chekhova121 Taganrog,347900 the money went to Nadezhda Lekomtsewa this was for air fair,then she said she was in miscow at the airport and she had to show them 500.00 dollars before she could leave,again western union to Moscow and i had to send it to her friend because they had her I.D. It went to Elana Presnyakowa I have the control numbers for western union the 300.00 # is9056317630 and the 500.00 control # is7716558916